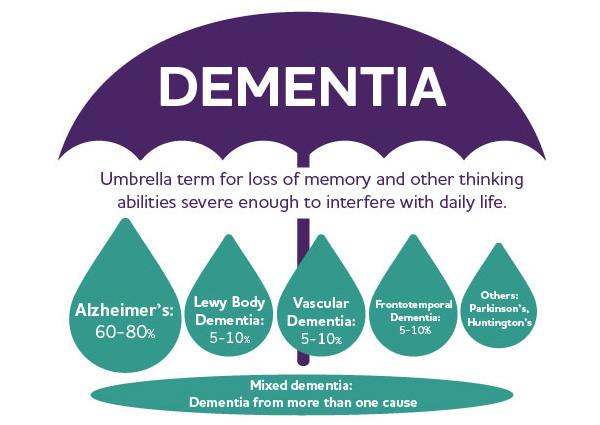 Dementia is a term basically used for a group of symptoms affecting memory, thinking and social abilities. It’s not a specific disease itself but several diseases can cause dementia. It’s a progressive deterioration of intellect , behavior  and personality due to diffuse disease of cerebral hemisphere, cortex and hippocampus. Alzheimer’s is a very common cause of dementia .  Memory loss , impaired judgement and los of communication skills are some common symptoms associated with dementia. If diagnosed early , some of the symptoms of dementia can be reversed.

WHAT ARE THE CAUSES AND RISK FACTORS FOR DEMENTIA?

Doctors use medications to treat dementia in the following type:

Chandigarh Ayurved Centre has its own DEMENTIA GO KIT for pure nad natural treatment of dementia. This kit includes:

BENEFITS: These all acts as a mind relaxant. The use of this syrup provides good results to the dementia patient. This syrup has the best memory boosting power and helps in increasing the blood flow to the brain. It is used as an antioxidant that increases retention power

BENEFITS:  Mann Mitra tablet is herbal and purely ayurvedic medicine. It is used in Ayurvedic treatment for psychiatric conditions and help to balance all the three doshas of body i.e vata, pitta, kapha. CAC Mann Mitra tablet improves intelligence and speech problems. It is helpful for making the nervous system strong and nerves as well.

BENEFITS It helps to relieve stressful conditions. They help to pacify the nervous system and also helps to calm minds and make your body relax and light.

BENEFITS: : This formulation act at the level of the nervous system and facilitate proper conduction of signal impulse from the nerves to the muscles . It provides relief in psychosis, helps in mental weakness like short temper, decreased the ability to think, improves the memory power, and reduces the calcium level that hampers the brain functions.

In dementia , Panchkarma therapies can also be used to treat memory loss and to manage other symptoms:

This therapy is very useful in reducing depression and insomnia as well as helps in improving the memory. In Shirodhara , medicated oil is  continuously dripped  on your forehead for 30- 45 minutes . after it massage of your is done.